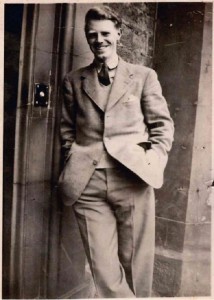 One of the more rewarding aspects of working on the Heroes Centre project is receiving enquiries and communications from  organisations and people seeking or providing information about the men and women that we have included within our Hall of  Fame.  Over the years we have put long lost friends in touch with each other, provided memorabilia for exhibitions, contributed to  journals and have even brokered a commission for one of our artists.

But our most recent correspondence has certainly led to us receiving one of most unusual items for potential display in the Centre as  well as understanding the backstory of one of our Inductees a little better.

We are particularly indebted to Mr Val E West of Scarborough, Ontario, Canada who recently contacted us about Ronald Low and  the lifelong companionship that the built having met during National Service in the late 1940s.

Ron Low, who spent his final years in Helensburgh, was the son of RD Low, head of the children’s publications department at DC  Thomson. RD Low was a driving and creative force who masterminded many of Britain’s most popular and best loved story papers and comics including The Dandy and The Beano.

One day young Ron strolled into his Dad’s office to find out when he would be home for tea. At the time, staff at the DC Thomson headquarters were struggling for inspiration for a new character, when in walked Ron, scruffy hair, dressed in dungarees, clutching a bucket of potatoes.

Raised in Dundee, Ron always had a love of flying and planes and was a member of the local Air Cadets and University Flying Club. After graduating from St. Andrews University he embarked on a successful career as a GP in Lochinver before joining the Royal Canadian Air Force (RCAF) where he trained as a pilot at RCAF Gimli in Manitoba, Canada and flew jet aircraft, eventually becoming a Squadron Leader.

This was about as much as we knew about Ron until we were contacted by Val who kindly provided this personal insight. And his enquiry was sparked by an old letter that he found whilst having a clear out.

The following words are those of Val as he provided us with some insight into Ron’s career.

“In rummaging through old stuff which, no doubt, my sons will throw to the garbage bin when they “clear out “my place after I’m gone, I came across a letter Ron Low sent me when he had been posted to Yatesbury Radar School from Coltishall. Like all of us he was short of funds so the letter was written on toilet paper!

We were in the same Radar Unit at Coltishall. The actual site was Neatishead but we lived at the airfield near Norwich. Ron preceded me to the Radar School at Yatesbury. I caught up with him again there. We enjoyed that sort of easy relationship the service men find when mixed with complete strangers. He was two weeks ahead of me so he was posted before I’d finished the course.

Apart from a letter or two we lost contact. 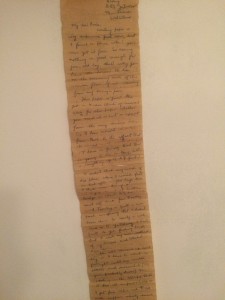 Then one day he wrote that he would be coming down to London and asked if he could stay with us over night. Naturally I said yes. We agreed to meet after our “business” was completed. Ron seemed a little stunned when we met up. Of course the story of how he came to be in the Royal Canadian Air Force (RCAF), and all the things that stemmed from it, must be well known to you. If however you would like the version he gave me…

He was a young recently minted (newly qualified) doctor trying to establish a practice. He said he was sitting at home, where he had his practice, when an urgent knocking at the door called him to open to a scene of consternation. An elderly woman had collapsed on the sidewalk (pavement) in obvious distress.

Being a doctor he responded, gave a quick examination, called for his wife to ring for the ambulance, and ministered as best he could to her needs. Help arrived and he sent her off to the hospital with his quick “diagnosis” as to her condition. He thought little more of it, being busy with his own patients, until one evening, a few weeks later, a knock at his door revealed a tall officer, in Air Force blue uniform who asked “Dr Low”?

It transpired that the lady who collapsed at his door was the mother of this man. During the discussion that followed Ron found that the man, who had come to his door and wanted to thank Ron for effectively saving her life, was with the RCAF. Ron’ service in the RAF came up, as did his interest in flying. Then the Canadian gent asked Ron if he would consider joining the RCAF,as a Medical Officer. What ensued was a bit of a whirlwind since the Group Captain had more than a little “pull”.

Ron recalled to Val that: “I was inducted into the RCAF as Medical Officer with the rank of Flying Officer ,marched down a corridor to another room where I was congratulated on my promotion to Flt Lt.”

We met again in Toronto where he was serving at the School of Aviation Medicine. Later that year, at Christmas, my wife and I were invited to spend it with Ron and his wife at the RCAF station where he was at the time. A couple of times later we visited, then as often happens, lost contact.

I learned he had eventually returned to Scotland. The Scottish Medical Association, quite properly, would only give the scantest information, as would the RCAF. So I let go.

Recently I have been trying to assemble yarns about my service, and scouring the net, have contacted a lot of former RAF men .So far I have not found anyone who served on the same camps at the same time. Ron was the only one I remember.

As I type this I have to hand a wee Dram, which I raise in salute to a man I liked and admired. I am so glad to be of service to commemorate a friend who by chance and endeavour, and no doubt to his surprise, became a Man of Consequence.”

This is a heartfelt and warming tribute to a man that so obviously meant a great deal to Val and we are honoured not only to have received this background information on a past Helensburgh resident, but also the original ‘toilet paper’ letter that has somehow survived the passage of time and sparked the memories written on toilet paper back in 1947.