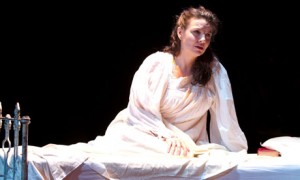 One of the UK’s most exciting opera stars is supporting plans to create a Digital Skills Academy & Entertainment complex in the Scottish town of Helensburgh, birthplace of John Logie Baird.

Soprano Lee Bisset, who is starring in the only complete Ring cycle to be performed in the UK during this year’s Wagner bi-centenary, has become an ambassador for the Heroes Centre – a two million pound project to revitalise the arts, culture and media scene in the west coast town.

Lee, who won critical acclaim for her ‘mesmerising’ debut as Sieglinde in Wagner’s Die Walküre at Longborough Festival Opera in 2010 went to school in Helensburgh and studied at RSAMD in Glasgow. She believes the plans to turn a deserted Victorian warehouse in the town into a four storey state-of-the-art digital media and entertainment centre will help to widen access to the arts.

Lee Bisset said: “As a professional musician I want to see as many people as possible, of all ages, have easy and affordable access to the arts, of every kind, including Opera. I am delighted that the plans for the Heroes Centre include the streaming of live events from around the globe.”
Phil Worms, Founder and Director of the Heroes Centre project, said: “Music, film and television has inspired many people from Helensburgh to achieve extraordinary things so we couldn’t be more proud or delighted that Lee Bisset is supporting our vision.

“Lee epitomises everything that we want the spirit of the Heroes Centre to convey. A member of the local community, who has, through a combination of hard work, determination and natural talent, followed a dream to reach the top of her chosen profession. Everyone has the potential to be whatever they want to be provided they have a supportive environment in which to thrive.”

The Heroes Centre will house a digital academy offering courses in digital media and production with facilities that local businesses can also access for web promotion and marketing. On the ground floor it will have a 170 seat cinema complex and ‘50s diner that will be open all year round for the local community.
Lee added: “Digital technology plays a hugely important role in the music industry now. It is used for recording, sampling, live streaming, lighting and composing. It is now an inextricable part of all our everyday lives and it’s vital that everyone has the opportunity to engage and feel comfortable with it.”
Lee will reprise her role of Sieglinde at Longborough Festival Opera in June and July this year as well as singing the parts of Freia and Gutrune in the only complete Ring cycle to be heard in the UK during this year’s Wagner bi-centenary. Future projects include Senta for Dorset Opera, and the title role in La fanciulla del west for Virginia Opera in the USA.

Phil added: “We’re delighted to welcome Lee to the Heroes Centre Ambassadorial team at such an exciting time for the project. Discussions are underway with a major academic institution around the scope and delivery of the educational content, we’re currently working with several funding bodies on the development of the final stage applications and we’ve recently completed two hugely successful community consultation days, which once again demonstrated a real desire for this project to materialise.”