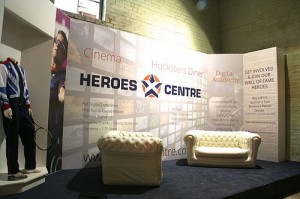 The Charity held two very successful Open Days on Saturday 4th May and Sunday 5th of May at the George Street premises, with both days attracting a constant stream of interested and engaging visitors.

Over the two days, visitors had the opportunity to discuss the Heroes Centre plans with various project team members and tour the building. The intended Wall of Fame, Digital Academy, Cinema and Diner features of the plans were represented by a display containing Paralympian tennis star Gordon Reid’s London 2012 tracksuit, a refreshment stand organised by the a number of school pupils (dubbed the Fabulous Baking Kidz), a screening of an artist’s impression of the Centre and a green screen studio set up.

Whilst these features may have added a little ‘colour’ to the event, the real purpose of the exercise was for the project team to share its vision and receive feedback from the visitors.

Two things appeared to strike our visitors almost immediately. The first was the sheer size of the George Street premises and the opportunity that its incredible space offered. Suddenly it became apparent that the siting of two cinemas, a diner and a large education centre within the building was a really realistic proposition.

And the second was just how developed and advanced the project actually is.

The project team is acutely aware that the concept and promise of the Heroes Centre has lingered for several years, and that for many, it was either destined never to materialise or it was some kind of perverse ‘hobby’ for a few well meaning residents with nothing better to do, who would periodically pop their heads up above the parapet to announce something new. The Open Days gave the project team the opportunity to counter and dispel these natural and understandable perceptions.

But the main objective was to gather vital feedback, and it is vital.

The project team are currently in the midst of delivering a £2.3M funding plan. Yes it is a scary number and yes it will be, in the current economic climate, a tough challenge but it is not impossible.

Several large funding organisations have shown an interest in the Heroes Centre project and understand the benefits or ‘outcomes’ that it has the potential to deliver. They like the digital aspect, the multipurpose use of a single facility, the fact that continuous funding is not required post initial capital investment and they love the use of local culture to inspire and motivate future generations. What they struggle with is this key question. ‘Does the Local Community want it?’

They expect a Project Team to provide ‘Yes’ as an answer to this question, but they also expect a body of substantive evidence to corroborate the answer.

Finding an empty building and formulating a set of exciting plans post restoration is not that difficult. Every community across the country has a wish list of facilities that it would want to materialise within its locale – be they leisure, social or business. The major funders see literally dozens of these applications on a daily basis. What they don’t see on a daily basis is concrete proof that what the Project Team is telling them meets the wishes of the community. A team of ten people can only speak on behalf of ten people not a thousand.

The Heroes Centre project team has, over the past two years, been collecting both quantitative and qualitative data across all segments of our community, to determine the value of its objectives.

The Open Days afforded us the opportunity to further build this collection and to compare responses collected this year with those from other years. Analysis will reveal if the needs of the community have remained constant over the period or whether there are now areas that have become more or less important. There is no point in pitching a cinema concept if most people now require a bowling alley for example.

It is extremely early days in terms of analysis, as more data is being collected (many forms have yet to be processed), but the Open Day feedback have already proved a valuable insight into the needs and requirements of our visitors. Here is a snapshot.

Our typical respondent is female, over 18 years of age, a parent with children living at home, and who had resided in the area for over five years.

The most commonly quoted positive aspects about the Helensburgh & Lomond Area include, and these are not ranked in any particular order but have been given repeatedly.

“I have always found it full if friendly people who usually are happy to share a smile and a pleasantry. I particularly like it in April when the blossom appears and when you glance up and catch the Arrachor Alps with snow on the top at the end of the road. It took maybe ten years before I found out just how many artists play Glasgow and have been a frequent ticket buyer since!”

Now the least appealing aspects, once again not ranked.

“There is virtually nothing to do without having to leave the town, as a resident of nearly 30 years I have seen Helensburgh in its bad days, its good days and unfortunately now in its really bad days. Its more village than town at the moment.”

“Nothing to do other than sports and it looks bad on a grey day. Too many bars and charity shops.”

“Rain, midges, not great for shopping for clothes or shoes for boys, no cinema or theatre nearby. I need to get 6pm train to get to Glasgow which is hard to achieve if I’m just in from work and I need a sitter for the children. The play areas aren’t great compared to England or even Dumbarton and Largs.”

Perhaps the next question is the most important as it asks ‘What do you think is needed to improve the area, if anything? and allows the respondent to complete without any prompting.

Once again the top comments in no particular order were:

“A cinema! A safe meeting place for young people, somewhere to go/meet friends at that doesn’t involve a drive, a community hub.”

As stated, this is very early snapshot, but initial analysis suggests that we are on the right track. We will be publishing more details, particularly around the responses to the specific Heroes Centre plans, in the next few days.

In the meantime if you have not already done so, and you live in the G84 postcode area, please complete a survey. It will only take a few minutes and it really is important.