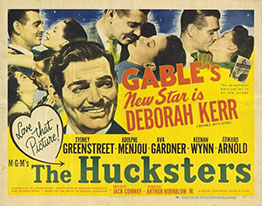 The film starring Clark Gable and his ‘New Star- Deborah Kerr (rhymes with Star)’ was a Classic 1947 movie about the fledgling advertising industry, and also featured Adolf Menjou, and Sydney Greenstreet.

Once in Hucksters, you’ll be able to relax, shake in hand, taking in some of the original Deborah Kerr film memorabilia on display. And as with all the classic 50s cafes, you can watch your food and drinks being prepared in front of you.

We reckon the authenticity of this venue, the cool atmosphere, fantastic cakes and beverages and friendly service will quickly put Hucksters on the West Coast’s culinary map and will be a hit with both locals and visitors alike.

Hucksters provides the perfect hang out for folks of all ages who want somewhere to relax, share great times and soak in some of that old fashioned Hollywood magic.

Helensburgh Heroes is delighted to announce that its book ‘Inspiring Lives ...

Hucksters, the cafe at the new Helensburgh Heroes Centre, is now officially ...