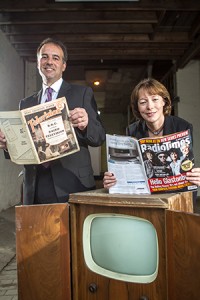 The campaign to build a digital skills academy in the birthplace of television founder John Logie Baird has received the backing of Glasgow Caledonian University, (GCU).

GCU is the founding educational partner for the proposed £2million campaign to build a digital skills academy in Helensburgh.

GCU’s School of Engineering and Built Environment is supporting the ambitious  plan to transform a derelict Victorian warehouse in the Clyde coast town into the Heroes Centre, a state-of-the-art digital technology school and community entertainment centre.

Working in partnership with the charity Helensburgh Heroes, the new digital centre could see the creation of a GCU Coding Academy with staff and students from the University teaching the basic building blocks of computer science and digital media to local schoolchildren.

Dr Morag Ferguson, Community and Public Engagement Fellow for Glasgow Caledonian University, said: “GCU has a leading reputation for the delivery of digital and new media education and for working with local communities. This project allows GCU to combine these together in a new and innovative way. Our staff and students will be able to develop their teaching skills while making a real difference to the lives of the people in Helensburgh and the surrounding area.”

Plans are also in the pipeline for sessions on state-of-the-art games developments for budding filmmakers as well as giving community groups the opportunity to utilise the expertise of GCU design students.

Phil Worms, Founder and Director of Helensburgh Heroes, said: “The Heroes Centre aims to provide access to an inspirational learning environment where all age groups in the local community can enhance their digital skills. To have our vision supported by one of the UK’s leading universities in digital media is fantastic news. With Glasgow Caledonian University’s support, we hope to make the Heroes Centre happen.”

The Heroes Centre will celebrate the themes of aspiration and inspiration and will also house memorabilia from the local men and women who have made significant contributions to society such as John Logie Baird and more modern sons and daughters of Helensburgh such as Paralympian Gordon Reid and opera singer Lee Bissett.

The charity has already received a Big Lottery grant to develop the business plan for the project and a recent open day in Helensburgh was attended by more than 300 people. The campaign to build the Heroes Centre has also received backing from Hollywood film director Tom Vaughan, who grew up in the town and film & television actor Lex Shrapnel whose grandmother, the legendary film actress Deborah Kerr, was born in Helensburgh and whose life will be celebrated once the centre is built.